Well I hope you like the look of the latest artwork. We’ve been messing with some filters and have settled on something finally.

If you want to know how to create podcast artwork on the cheap and on your phone, read on.

Firstly, we took a bunch of pictures against a white wall. You should use good lighting and a professional camera, but we didn’t, we had a single bulb in the lounge and an iPhone. It really It goes to show how well the app filters work later in the stages.

I then imported each image into an iPhone app called clip2comic (Android users, let me know if there’s something similar and I’ll add it to the guide)

I applied the Portrait B&W filter. This makes the images slightly cartoon like, puts a thick black edge on things and reduces it to black and white. no cropping at this stage.

I then messed with the Photoshop express filters (there’s a suite of free Photoshop applications available in the iPhone app store).

Photoshop express always wants to crop the canvass or create reflections in the first step though, I was going to ditch this as I couldn’t find a way to turn it off, but then I found the freeform shapes. I was happier, this made it look like our image was spread across 5 postcards.

I then used the text icon to apply some text to the image, I edited the size, font and colour and viola! We had our new podcast logo.

Its amazing how simple it is and how striking they came out. I went with black and white so that we can apply a colour to the white part if we feel like it later.

We have loads more images from the session, I probably spent 45 minutes messing with more pictures and filters so I now have a bunch to use later.

If you fellow podcasters are looking for a simple logo creation technique, this has to be one of the easiest and quickest free methods . 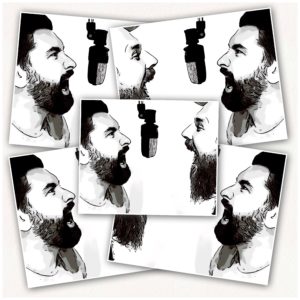 Finally, if you need precise cropped images for your uploads. I use a windows program called Irfanview. I’ve used it for years and its one of the best bits of software I’ve ever used for bulk image handling. its pretty straight forward, use the mouse to drag the crop you want directly onto the image, notice the pixel count in the applications header bar. when you have your dimensions, you can move each bar independently afterwards if you didn’t choose the right starting point, cut the image ctrl + X and paste into a new window (ctrl + N then ctrl + V). Save this and you’re laughing.

This application will reduce colour count or resolution. It can batch convert entire folders and subfolders of content. flip, rotate, mirror. It can even be setup to screenshot your work into a folder so you can play with the images later. All really quickly and using many shortcut keys. If you write technical documents, as I used to do, it’s great to be able to manipulate pictures very quickly before chucking them into Word.

Apologies, its another drunk episode. But hold tight for some great stories. Even if we never hear about the stag do.

Well it’s been a while. This episode was recorded back on 17th March, so it’s a month now. Finding time to record and edit an episode is proving difficult with work commitments. But we are setting time aside to work on more skits and episodes. I hope you stick around because its starting to feel more natural now and things are coming together. Sorry to anyone that takes this episode seriously. Its only entertainment!

Hello, its Dave of the Steve and Dave podcast empire fame. I’m the guy on the left if your facing us whilst listening and on the right if your sitting on our side whilst you listen.

Right now, im sitting on the bog, as described in the title. This will be the first of a few posts from the bog. Seems like a strange way to do it. but I’m down with the kids.

We’ve been crazy busy since embarking on this little SADWIP adventure. From the outside it may seem nothing much has been done since the day we decided to try this thing. From the decision to do something on a Saturday night in October 2017 when I was dressed as Jesus and Steve was dressed as the devil, we sat on a bench and discussed how we both yearned to create something, but couldn’t seem to find an exact path. We discussed the idea of writing sessions and perhaps going on to do something like standup or script writing.

6 months after the Halloween party, that’s right, we weren’t just sitting on a random bench in fucking fancy dress. Ye of very little faith, we do that on Thursdays! Anyway, 6 months and many costumes later, we decided a way to understand would be to perform. And so, a very loose bases of a podcast was born. We would talk openly and see what came out.

When we started, as you will hear, not much happens. In the middle I think it gets better, but even though we laugh, I’m not sure its funny, sure there are laughs but I don’t think its workable comedy yet.

Let me fill you in. so we have a name… a loose direction… an idea! But we (steve and dave) are amateur, we’re learning on the job. Which is exciting, but also very daunting as we are putting material out with no real… direction… no USP, unique selling point, oh yeah, I’m learning the lingo. But we are getting content first and slowly learning production and writing techniques, to figure out how its done!…

The site is running, you’re reading it right? Steve can bore the tits off of you with the technical stuff if you really like. The social media is up. We need to start tweeting some jokes and see if that gets trending. What I am saying is, we have the infrastructure and wherewithal to put content out.

And this is where I hit a little crisis, as I type we have 4 recorded podcasts and one awaiting the edit. Do we Steve? It’s been a week mate, pull your finger out! I have learnt something with each recording, about myself… about podcasts and dipping into writing. But how do I turn this into something? A script? A monologue?

Everything we have done so far i.e. the finished podcast episodes have not had much thought, research, writing or editing applied to them. Basically recorded chats. Each has progressed a little and we are carrying the lessons on to the next. But very relaxed just turn up chat a little then record and everything is freestyle. Top of my head ya’ll!

We also recorded a fun advert about bees. We have a couple more adverts written and ready to record. We want to create more fake adverts and stings to break the talking up a bit. A sort of sketch podcast! ‘Sketchcast’. I think this will be really good. We also had a great chat in the pub about introducing segments into the ‘cast. I think these will work well as we were laughing as we ran through hypotheticals.

The last episode we recorded has stepped up another gear and we actually wrote an intro which opens another can of worms as now we are venturing into performing which is again something that neither of us has done before. Listening back we both aren’t keen on our voices but this is something I’ve heard comedians saying loads before. I mean, if Josh Widdicombe can do it with those dulcet tones and Jimmy Carr with ‘that laugh’. Hey surely there’s hope. I guess the difference being those guys are fucking funny and great writers. I’m just going to practice my silly laugh some more.

As for the nerves, fuck ’em. We’re here to have fun. I hope you enjoy the content as it’s only getting better. Please comment and let us know if it’s any good or a disaster. Or maybe you’d just like to give me tips on my ridiculous laughing technique.

all the best, Dave… putting the D in podcast and putting a 2 in the pan. I like this bog posting, I can see why it’s so popular now.

Stick with us, its going to be great.

This week Steve and Dave discuss the English language. But mostly what bugs them about it. Brought to you by Sal Pitchman, high energy advert sales in your area.
Join us …. www.sadwip.com @SADWIPUK

Well that’s the 4th episode in the bag. We had a great chat about Marathons in the build up to the London Marathon that was running past the flat the following day. Join us for jokes, banter and skits aplenty. Technically it’s much better quality, I’ll create a blog to explain the audacity changes, I’m also pleased with the production; trimming dead air and nonsensical chats that spiralled. Let us know what you think by commenting in the blog or on iTunes: www.sadwip.com

Join us in the 3rd episode, we’re proud of this one. We interview Jordan, who is working on his start up selling street food in Eindhoven in the  Netherlands. He’s also used his talents to add a few guitar chords that we are adding music to help the episode to spice things up a little. We’re also getting to grips with more techniques like cutting dead air, trimming boring conversation and of course adding skits. Well, that’s 3 in the bag. Please come over to our page and offer feedback or work with us on future episodes. www.sadwip.com

Well, we come to episode 2 and we nearly didn’t upload this. I think lesson learned here is to keep it to a punchy 40 minutes at most or split the episode. With Episode 3 in the bag I didn’t want to mess with the numbers at this stage. So I’ve done some very light noise reduction and we will leave editing content to a later episode. Join Steve and Dave in this episode where they talk about one of their oldest pet peeves, Traffic. Are you a fellow podcaster or a fan of the medium? We welcome feedback from everyone and hope likeminded people can share opinions, tips and advice on podcasting. Go to http://sadwip.com to comment on the episode.

Being a bare bones, start from nothing podcast. We wanted some artwork to reflect that. So, whilst setting up the equipment and getting audacity ready, my son started drawing Me and Dave sitting at the desk. He left the drawing on the desk a fell asleep on the sofa and the recording began. We looked at it whilst recording and from the haze of the drunken record, I remember thinking how perfect it was. I’d like, if anyone does listen to this in the future, to have a go at updating the artwork. It would be great if the artwork got slightly better as we improved the content and quality of the show. don’t you think? 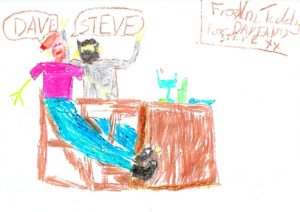 The first episode of Steve and Dave’s a Work in Progress. A bit rough around the edges but we are finding our feet. We also get a little tipsy toward the end, so plenty of lessons learned there. Next steps will be to start looking at the quality of the production and making a better podcast. We hope you join us on the journey and with your feedback we hope to create something people will enjoy listening too.